Fight Crab is a new game by the indie studio Calappa Games[1] (aka Nussoft, Japan). As you might have suspected from the title, it revolves around crabs fighting each other. What you might not have anticipated, though, is that the crabs fight wielding over 40 different kinds of weapons, from swords and axes to chainsaws and light saber.

Given that this is the most innovative concept in fighting games since ever – and also a good display of crustacean biology – we just had to interview game developer Onuki Masafumi to uncover a little bit more about the game’s behind-the-scenes story. Take a look below and see what we found out. 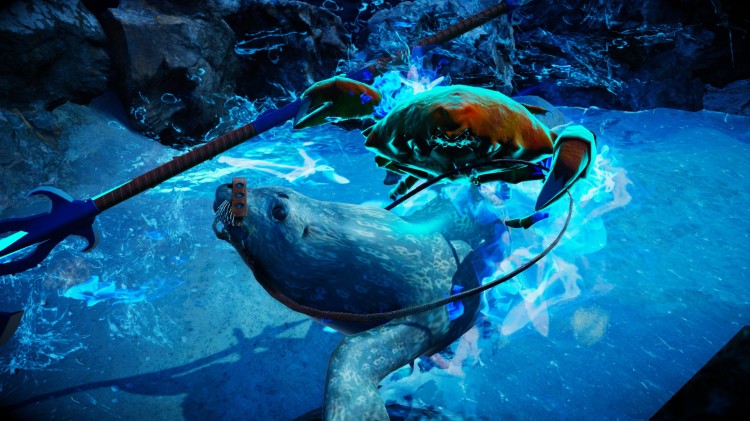 The premise Fight Crab is quite unusual. Where did you get your inspiration from? Was it some viral video on the internet, or some funny real-life story perhaps?

Is there a ‘story mode’ in Fight Crab? If so, how do you tell a story about crabs?

The battle is their story. The campaign mode is driven by location staging and flavor texts.

The crabs have a very interesting selection of weapons at their disposal. What did you look for while choosing the weapons?

It’s about having various shapes and functions. We focused on things that hit you directly, not shooting or magic.

We couldn’t help but notice that there are 23 different types of crustaceans in your game. What were your criteria for choosing them? Are all of them real-world species?

All but one are real species. The selection criterion was that it had claws.

Can we expect to find some other amazing crustaceans besides crabs as well? A mantis shrimp, perhaps?

So, which crab species is your favorite?

The design of the crabs is very detailed and realistic. Was there a concern about biological accuracy when designing the crab models?

I’m mainly concerned about not deforming the leg joints. There are six joints per leg, all actually moving.

Did you get to study some crab science while making the game?

I haven’t studied biology, but I gained knowledge through anatomy.

Typical fighting games have characters with two legs only. How difficult was it to animate all the legs of the crabs?

Rather, crabs don’t have to worry about their center of gravity balance and their gait is more stable, which is easier than bipedal walking in a physics simulation environment.

There are circa 7,000 species of crab in the world[3] and many are endangered and threatened with extinction, especially due to overfishing.[4] Real crabs can’t use swords and chainsaws to protect themselves, so they depend on the goodwill of humans and public perception to survive. Do you think Fight Crab can make people realize how cool these critters are and maybe become a little more inclined to protect these creatures?

I hope so. I want them to aim for a sustainable fishery rather than aiming for a lot of money.

If the crabs in Fight Crab could say something, what would they say?

Last but not least, on which platforms can we play Fight Crab?

You can play it on Steam and Nintendo Switch.

[1] You can find it at https://www.neoaq.net/games-en/fightcrab/

[2] Calappa is a genus of crabs belonging to family Calappidae, popularly known as ‘box crabs’ or ‘shame-faced crabs’, because its claws are held together to the body, as if the crab was hiding its face. There are over 40 living species in the genus Calappa, plus nearly 20 fossils (Ng et al., 2008; De Grave et al., 2009).