Wingspan is a game entirely about birds and it has been a wonderful surprise, being considered one of the hottest titles for 2019[1]. This is the first game from designer Elizabeth Hargrave, published by Stonemaier Games, and will be available in March this year.

In this game, the players take the role of bird enthusiasts (researchers, birdwatchers, and ornithologists) and must discover and attract birds to their wildlife preserves. In board game terms, Wingspan is an engine-building game, that is, a game in which you have to establish an effective system to generate and accumulate points. There are 170 unique bird cards in the game and, as you add them to your nature preserve, they help you do more and more on each subsequent turn. In general, forest birds make you better at getting food, wetland birds help you get more cards, and grassland birds make you better at laying eggs.

The Journal of Geek Studies interviewed Elizabeth Hargrave to understand how ornithology and ecology made their way into a board game. You can read the full interview below. 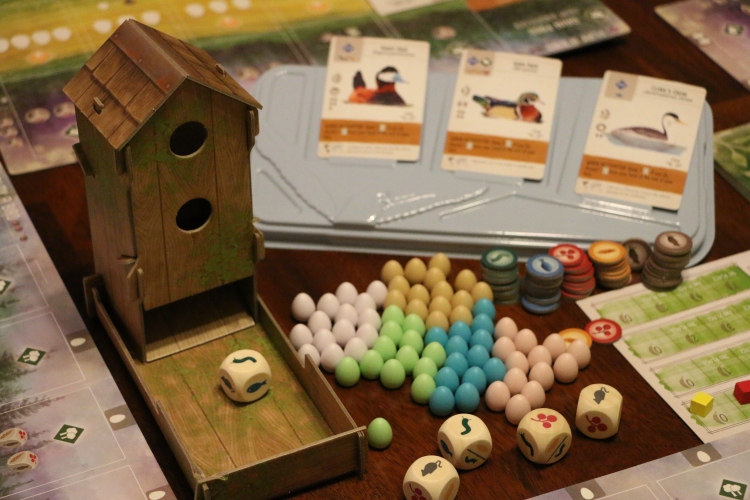 Q: To come up with a game based on birds, you must be a birdwatcher or an ornithologist, is that right?

A: Yes, I’m an amateur birder.

Q: When did your interest in birds began?

A: I’ve always been a nature lover and appreciated birds in general when I saw them, the same way I appreciated any other wildlife. I’ve always had a bird field guide and a pair of binoculars around. But I didn’t really start intentionally birding – like, going out with birds as my primary purpose – until maybe 6 or 7 years ago.

Q: What gave you the idea for a bird ecology game?

A: I felt like there were too many games about castles and space, and not enough games about things I’m interested in. So I decided to make a game about something I cared about.

Q: Did you bring into Wingspan some of your experience with birds? Your favorite species, maybe?

Q: So, let’s turn to the game now. What is the players’ goal in Wingspan? How does one win in a bird game?

A: You win by having the most points. A lot of your points will come from playing the birds themselves, but you can also get points by laying eggs or by using certain bird powers. And then there are specific goals and bonuses that change from game to game. You might have the “photographer” card that will give you bonus points for birds with colors in their name, or the “falconer” that gives points for predator birds. And then there are shared goals that you can compete for, like having the preserve with the most eggs in it at the end of a round.

To win, you usually have to choose to focus on some of those things over others. And you need to think about how the different powers on the bird cards could help you get there. 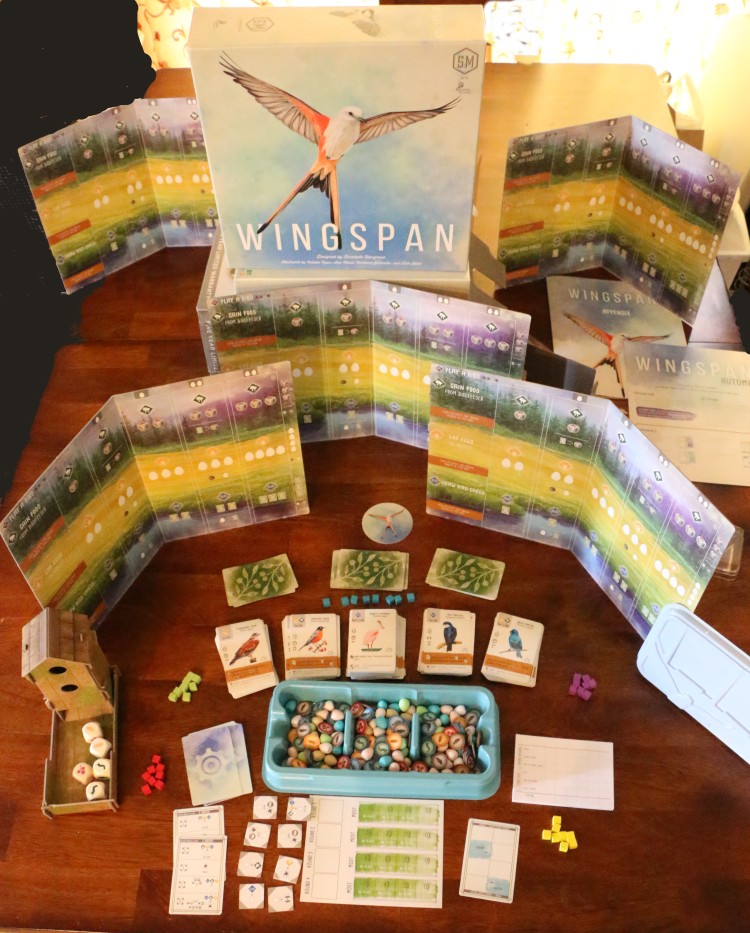 Q: The game’s strategy is spun around a lot of ecology. What sort of information have you brought from the real world into Wingspan? Or, better put, how much scientific data have you included in the game?

A: There is a ton of real-world information on each card. Birds get played into certain habitats on your player mat, based on their real-world habitat. And each card’s cost is food, based on some very simplified categories of the food that the birds actually eat. And each bird’s nest type could play into the end-of-round goals.

When I could, I tried to work in real-life bird behavior for the powers on each bird. For example, predator birds go hunting by looking at the top card in the deck: if the bird has a small enough wingspan that the predator could eat it, you get to keep that card and score a point for it. Nest parasites like brown-headed cowbirds get to a lay an egg on another bird’s nest when another player lays eggs. That kind of thing.

And finally, each card has a little factoid on it about the bird, and a very simplified map of which continents it is native to. Those don’t actually come into play on the game, but sometimes they might explain why a bird’s power is what it is.

Q: Do you hope the players will learn something about the birds by playing Wingspan?

A: I hope that it’s a game that you can play primarily as a game, without feeling like you’re supposed to be learning anything… and then maybe accidentally pick some things up along the way. A lot of educational games feel very preachy to me, and that’s not my intention. But I do hope that as players interact with the birds in the game, some of the real-world information that’s there is interesting to them. 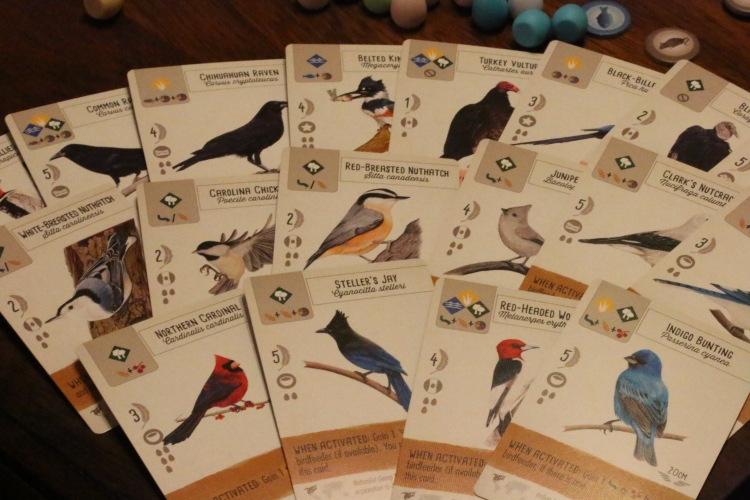 Q: Suppose a player is inspired by Wingspan to do some birdwatching of their own. Would you have some tips to offer to this fledgling birder?

A: Find a list of common birds for your area, and look for them right around where you live. Once you have a few birds that you can reliably identify, things get easier.

A pair of binoculars makes a huge difference. You don’t have to spring for a super-expensive pair right away – there are decent starter pairs for the cost of a board game. But it’s incredibly frustrating to try to ID birds without being able to see all their markings.

Find a local birding club, or hit up a birder friend – most people are happy to share their knowledge, and to have you along as an extra pair of eyes. I once caused a major freak-out in a group of more-knowledgeable birders by saying “hey, what’s that one?” – it turned out to be a golden-winged warbler, a beautiful bird that very rarely visits our area.

Download the eBird[4] app and keep lists of the birds you see. If you’re anything like me, growing your personal list will be addictive – but you’ll also be contributing to a worldwide database that ornithologists use to track trends in bird populations.

Q: Do you think ultimately Wingspan can help with bird conservation efforts?

A: As much as the industry is growing, board games are still a pretty niche hobby. But every little bit helps! I have definitely heard from gamers who have started paying attention to birds in real life because of Wingspan.

Q: Is there any takeaway message you’d like the players to get from Wingspan?

A: I always set out to make it a fun game first, about something that I love. If you have fun playing Wingspan, my mission is accomplished. If you can see why people love birds – or get interested in them yourself – after playing, even better.

This is the first published game from designer Elizabeth Hargrave. Bird art is by Natalia Rojas and Ana Maria Martinez Jaramillo, while art for the player mats and birdhouse dice tower is by Beth Sobel. Christine Santana did the graphic design. David Studley designed the solo version of the game, with help from the Automa team. Jamey Stegmaier managed the whole team, and worked with Elizabeth to develop the gameplay.

[1] McLaughlin, S. 2019. Birds star in one of this year’s hottest board games. National Audubon Society. Available from: https://www.audubon.org/news/birds-star-one-years-hottest-board-games (Date of access: 19/Feb/2019).

[3] There are circa 760 bird species that breed in the USA and Canada, according to the Cornell Lab of Ornithology (https://birdsna.org/Species-Account/bna/home).

[4] eBird (https://ebird.org/home) is a project of the Cornell Lab of Ornithology.