Beyond Blue is a new multiplatform indie game by E-Line Media.[1] The game is set in the near future, and you explore the ocean as part of a new research team. During your dives, you can see and interact with the marine fauna. One of the most interesting things about Beyond Blue is that the team at E-Line partnered with BBC Studios and OceanX Media for creating the game. And even better than that, they had the support of actual scientists to give them expert advice about everything that goes on in the sea.

We reached out to one of these scientists, Dr. Samantha “Mandy” Joye from the University of Georgia (USA), to understand her role during game development and to get to know a little bit about the actual science that is backing Beyond Blue.

You were one of the experts who gave advice to the game designers of the recently released Beyond Blue. How exactly did that partnership came about?

Before we move on to talk more about your time with Beyond Blue, would you mind explaining a little bit of your research to our readers?

I am oceanographer. By training I am a microbiologist and a geochemist, so my work is interdisciplinary at its core. I work a lot in deep sea extreme environments like hydrothermal vents and methane seeps, but we also work in the pelagic ocean. I study the ocean “top to bottom” – I am fascinated by connectivity and complexity and a lot of our work assesses benthic-pelagic[2] coupling and exchanges. Overall, my work strives to understand how ocean ecosystems respond to perturbation through adaptation and resilience.

How did your experience in Marine Sciences was translated into Beyond Blue? What kind of advice were you giving?

My role involved sharing my knowledge of the ocean – particularly the deep ocean – with the E-line team. I helped ideate gameplay scenarios and assured that scenarios are based firmly in known science. We also ideated technology that we felt was needed today – “in demand” – and that could be developed in the next 10–15 years.

We can see a good deal of science was weaved into Beyond Blue. What do you think is the game’s greatest accomplishment in this regard? And what theme(s) do you think should have been explored further?

I love that science is central to the game! The gameplay and flow were developed strategically, and there are several jumping off points for development of future gaming scenarios. I don’t look at the game as one part being more developed than another – I see this as a way to allow seamless downstream production.

In the game, the player can dive and experience the ocean’s wildlife up close. You’ve been in submersibles and must have experienced amazing encounters with all sorts of fantastic and weird creatures. Could you describe what’s that like? What was the most memorable encounter you had in the depths?

I’ve had incredible ‘up-close-and-personal’ experiences with animals from inside a submersible and while scuba diving. One of the most remarkable animals I’ve ever seen from inside a sub was a 6-meters-plus sixgill shark (Hexanchus griseus). I saw this animal when I was doing my first dive in the sphere – as lead scientists on a dive – of the Johnson Sea Link submersible. We were diving at a methane seep in the Gulf of Mexico and were checking on some instruments we had deployed at the seabed. One instrument had a large radar reflector attached to it (so we could find it) and the reflector was about 1 meter across. The shark was enormous! I still remember what I said – “holy cow!” – but what I did amazes me. I kept the camera on the shark as it swam past us, giving us the side eye. It swam around us – past the radar reflector – and I got the shot and we were able to determine how long it was (about 22 feet / 6.7 m). Biggest shark I’ve seen from that close (probably not more than 10 feet / 3 m away from us). She came back several times during the dive to make sure we knew we were in her territory but she was not close enough to get shot that good!

Scuba diving I’ve seen all kinds of fish, critters, and mammals. I love whales, of course, but once I ended up swimming with a group of green sea turtles off the north shore of Oahu once and it was magical. One of the larger turtles was fascinated (I guess?) by my ponytail and kept grabbing it playfully. For probably half the dive it swam with me. Others kept their distance but not this one. It was quite an experience to have this beautiful animal swim right beside me – watching me as much as I watched it – for almost half an hour. It was quite a memorable dive.

Beyond Blue focuses heavily on whales, but they represent just a tiny fraction of the ocean’s biota.[3] Do you think that’s justified? Or has the “save the whales” banner been overused by now?

Yes, it is justified because whales play a vital – truly essential – role in the ocean. We need to “save the whales” as much for ourselves as for them. Why are whales a tiny fraction of marine biota? Because we’ve fished them out and now, we’ve set our ship channels in their migration paths leading to ship strikes that further decimate endangered populations. I have been working with an amazing modeler, Brock Woodson[4], and he has led the work that discovered that much of how we think about marine food webs[5] – the classic idea of a triangular trophic pyramid with energy going from the bottom to the top – needs revision and rethinking. Energy can flow very efficiently from low trophic levels to whales, directly building a lot of biomass. Whales and other megafauna were SO much more abundant in the past and by restoring whales, we could go a long way towards reviving ocean sustainability. Some insidious threats were shown in Beyond Blue, from bits of plastic the player finds on the seafloor to the terrifying deep-sea mining equipment. Among the many threats our oceans are facing, which one is the most pressing?

In my opinion, the most pressing single stressor on the ocean is climate change – climate change is literally destabilizing the physical stratification and circulation of the ocean. Changes in ocean stratification and circulation have far reaching consequences for ocean biota and ocean function and all of the consequences are bad. That’s not to say that plastics and mining are not issues to be concerned about. They are critical issues and I worry about both. I just worry about the impacts of climate change more.

So, how do you feel about Beyond Blue now that’s out? Do you think it can give players a deeper appreciation for our oceans and all the life in it?

Yes! The game does a remarkable job of providing players with an incredible experience that is science-based yet fun and fascinating, and even motivational.

Do you think Beyond Blue has potential to be used in classrooms? As a teaching aid or, perhaps, as a ‘mandatory reading’.

Yes. I’ve actually written proposals with the E-Line team to do this very thing and I hope we have the chance to develop education content around the game. Is there some take-home message you would like the players to get?

The ocean is fragile.

In the ocean, everything is interconnected at some level.

Science is hard (!) but fun and rewarding.

Find your passion in life and pursue it with vigor.

Supposing the game picked the interest of a player about life in the oceans, could you recommend them some references about it?

The BBC Blue Planet II series is simply FANTASTIC!! There is a book too.[6]

Rachel Carson’s The Sea Around Us is a must read for everyone interested in the ocean. I love Susan Casey’s book Voices in the Ocean (about dolphins). I just reread it recently and it was even better the second time. The Extreme Life of the Sea by Steve Palumbi is also very good. Blue Hope is a photography-based book by Sylvia Earle and I love it (as do my kids).

And now the big question: do you play video games?

No, I don’t. I would be an addict if I did, because I’m extremely competitive. So, I read instead. 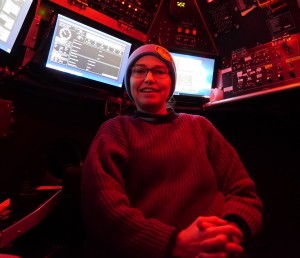 Dr. Samantha Joye is a microbiologist, an educator, a deep ocean explorer, and a vocal ocean and environmental advocate. Joye is a Regents’ Professor and also holds the Athletic Association Professorship in Arts and Sciences at the University of Georgia; she is a Professor in the Department of Marine Sciences. She is an expert in microbial geochemistry, focusing on understanding elemental dynamics, particularly in pelagic and deep ocean environments. Her work is highly interdisciplinary, bridging the fields of biology, analytical chemistry, and geology. Her research is widely published in leading scientific journals, and she is regularly called upon by national and international scientific and policy agencies for expert commentary. Her research has been supported by substantial, multi-year research grants from the National Science Foundation, the Environmental Protection Agency, the Gulf of Mexico Research Initiative, the Department of Interior, and the National Oceanic and Atmospheric Administration, among others. She is a Fellow of the American Association for the Advancement of Science, the Association for the Sciences of Limnology and Oceanography, the American Geophysical Union, the American Academy of Microbiology, and The Explorers Club.

Mandy is a huge sci-fi nerd and having a sci-fi book use something she played a part in discovering in its plot is pretty cool. Have you read The Swarm by Frank Schätzing? Well, this book describes a worm that lives on methane hydrates in the deep sea – methane ice worms. Mandy was on the expedition where these ice worms – yes, they are real! – were discovered and is a co-author on the paper reporting the discovery.[7]

[1] The same studio responsible for the award-winning Never Alone (Kisima Inŋitchuŋa) of 2014.

[2] The term “pelagic” refers to the water column, the home of swimming and floating organisms. The term “benthic”, on the other hand, refers to the bottom of the ocean, where organisms crawl along, burrow into, or attach themselves to the substrate.

[3] There are circa 90 species of cetaceans worldwide (counting whales, dolphins and porpoises), but over 200,000 animal species in the sea. Cetaceans make up less than 0.0005% of the marine fauna.

[4] Dr. Woodson is also a researcher at University of Georgia, USA.