Project Hospital[1] is a game developed by indie studio Oxymoron games (Prague, Czech Republic). In it, you build and manage every single detail of your own hospital – and you can diagnose and treat patients as well! Launched in 2018 on Steam, the game features a wealth of real-world-based medical expertise, equipment and diseases and injuries, counting with an in-depth diagnosis process.

To understand how all of this is possible in a game, the Journal of Geek Studies interviewed Jan Beneš, lead programmer at Oxymoron games. We uncovered the story behind Project Hospital, which you can read below.

Q: There are a few hospital and “medical” sim games around, but Project Hospital is a fresh and more down-to-Earth example of this subgenre. How the idea for this game came to be?

A: The story began like this: a small group of developers met in early 2016 to discuss starting a new studio and hopefully agree on the first project. Most of us are now team members or co-founders of Oxymoron games and as it turned out, Project Hospital was definitely a good choice of a game that we’d be both able to create with a team of 2–4 people and which would find its place on the market thanks to the combination of theme and realistic settings. The original pitch itself came from Roman, who then took the role of lead designer and main artist on the project.

Q: Have you or anyone in the team worked in a hospital before?

A: Actually yes, one of our designers has some experience from medical school combined with an internship in a hospital, and while he took a different career path later, his familiarity with the field was essential when choosing and creating content for the game.

Q: Did you contact staff from hospitals (admins, nurses, physicians, etc.) for advice when developing the game?

A: When we announced that the project was in development, quite a few real-life doctors and professionals in the medical field got in touch and we spent a lot of time discussing different topics in a private section of our forums. This really helped, for example, with choosing the best terminology for different aspects of the game and to some extent to see if we can get away with some of the necessary steps needed when transforming a very complex topic into a game, while advertising the realistic settings.

Q: How much realism did you set out to include in Project Hospital and how this realism was balanced with gameplay and entertainment?

A: The foundations based on real-world medicine gave us clear boundaries, but to create an engaging game, gameplay must come first. To be more specific, this means choosing a correct level of simplification and turning complex material into rules like “examinations uncover symptoms”, “uncovering enough symptoms leads to a clear diagnosis”. In the next step, it was necessary to adjust a lot of values to create interesting cases for the players to solve — for example, the occurrence rate of certain symptoms in different diagnoses was needed to be set in such a way that would limit cases where it’s immediately clear what the patients are suffering from after first examination.

The process was a bit easier on the side of hospital management — and while this wasn’t the actual goal and we carefully balanced the economy aiming for a challenging experience — it turns out that the simulation is actually very close to the American healthcare system[2], which is both fascinating and pretty scary. 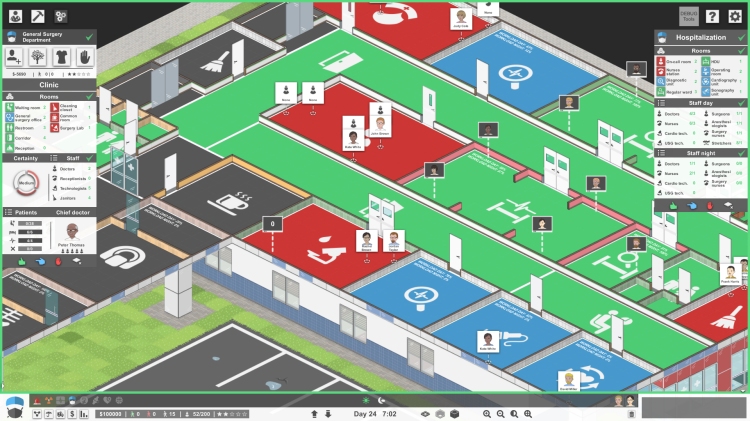 Q: So, let’s delve into some of that gameplay now, shall we? What is the players’ actual goal in Project Hospital?

A: In our elevator pitch for Project Hospital we always mentioned that the game would allow players to focus on different aspects, whether it is the building part with all the little details, managing a huge hospital and making it as efficient as possible, or taking care of individual patients. The latest version of the game still follows these rules as far as possible and on top of that, for players looking for more structure, we added a short campaign with some interesting tasks to undertake.

Q: Does the game allow specialization in particular subfields of medicine? Like making your hospital a reference in ophthalmology‎ or oncology, for instance.

A: The content is indeed structured into individual departments and you can focus on any of them in any particular build, as well as running only a clinic. The five main fields available in the base game include for example cardiology, neurology and orthopaedics, with more planned for future DLCs and more also getting added by the community thanks to mod support. Oncology would be an example of a field we didn’t select ourselves, but has been already added to Steam Workshop.

Q: From what we’ve seen, there are different objectives to be met, like solving complex cases, keeping staff and patients happy, and make profit with your hospital business. Is there a trade-off between these objectives in the game?

A: The game generally rewards you for taking good care of your employees and patients alike, so there should be no conflict between being a good manager and helping your staff with complicated cases when needed. For the players who want to focus on one specific goal, the game tries to help by making almost every aspect automated to some extent. Not interested in building? Try one of the pre-built hospitals or place whole rooms using the collection of prefabs. Not up to dealing with individual patients? Hire experienced staff and let them do their job.

Q: One cool thing in Project Hospital is to solve difficult cases. When doing so, the player is unknowingly making use of decades of real medical research. Is there a nod in the game towards scientific research and how medical knowledge evolves?

A: From this point of view we use one snapshot in the development of modern medicine — the systems are already pretty complex and quite demanding for new players, so for example researching new and more effective types of medicine didn’t become a priority. There’s definitely enough challenge already in finding the correct diagnosis, uncovering all potentially dangerous hidden symptoms and treating the patients on time.

Q: Unfortunately, there is a current trend of once-eradicated diseases making a resurgence. So, when you’re dealing with an infectious disease in the game, is there any discussion or statement about prevention, vaccination, etc.?

A: This is definitely an interesting topic, but has mostly fallen out of scope of the main release — that said, we’ll still have opportunities to tackle some of these aspects in the future and it’s true that with the recent news regarding the coronavirus outbreak[3], we’ve been even getting similar requests from the player community.

Q: Do you think there is an educational potential for Project Hospital?

A: In a way, Project Hospital contains a pretty extensive encyclopedia of medical conditions, symptoms and diagnostic methods. While, for example, a lot of the probabilities in the background are balanced more towards generating interesting cases than strictly following reality, there’s a lot to learn from the game.

And while we can’t really share more details at this moment, a couple of institutions have been evaluating the game for the use in training (I guess more for managers than doctors, but still…).

Q: So far, have you received feedback from the medical community? What has that been like and how does it differ from regular player feedback?

A: We’re amazed how big a part of the player base are actual doctors or people with doctors or nurses in their family — and an obvious observation, their real-world experience indeed makes it much easier for them to get into the game.

Oxymoron games is an indie game studio based in Prague, founded by a small group of Czech industry veterans. They have experience both at home and abroad, having worked on various game genres and interesting titles like Mafia II & III, Quantum Break, Top Spin 4 or Euro Truck Simulator. In 2016, they finally found themselves at the right place in the right time to have a shot at becoming independent. After the successful release of their first game, Project Hospital, they’re currently working on more content and supporting their player base, while preparing for future adventures.

[2] See also Boudreau, I. 2009. ‘Project Hospital’ is a great way to understand our broken healthcare system. Available from: https://www.vice.com/en_us/article/wjvxk5/project-hospital-is-a-great-way-to-understand-our-broken-healthcare-system (Date of access: 19/Feb/2020).

[3] The virus has now been named COVID-19. See more at: https://www.who.int/emergencies/diseases/novel-coronavirus-2019